Here is the order I would rank the 2nd week’s entries. I have to preface it, though, with the weather. The weather has been either frigid and rainy, or humid and warm these days. This plays a huge roll with the Grand Tsukemen Fest. The bowls are plastic, and you are sitting outdoors. Thus, on colder day, the soup is quick to mellow. 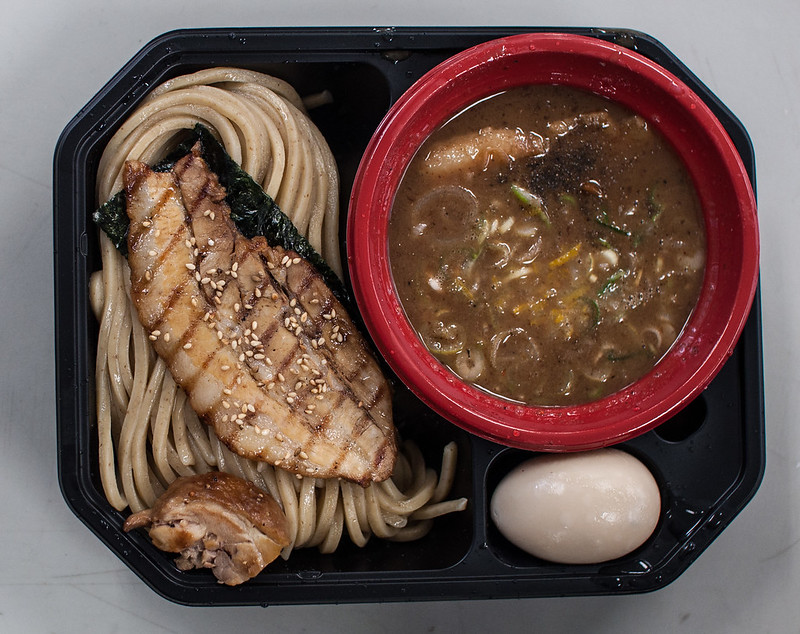 中華蕎麦 とみ田- Tomita, as expected, was the clear winner. Amazing noodles and a soup that is outstanding. This is the gold standard of tsukemen in Japan, and I won’t be surprised if the 2012 champion is also the 2013 champion. On the rainy days, they were the only shop with a line. 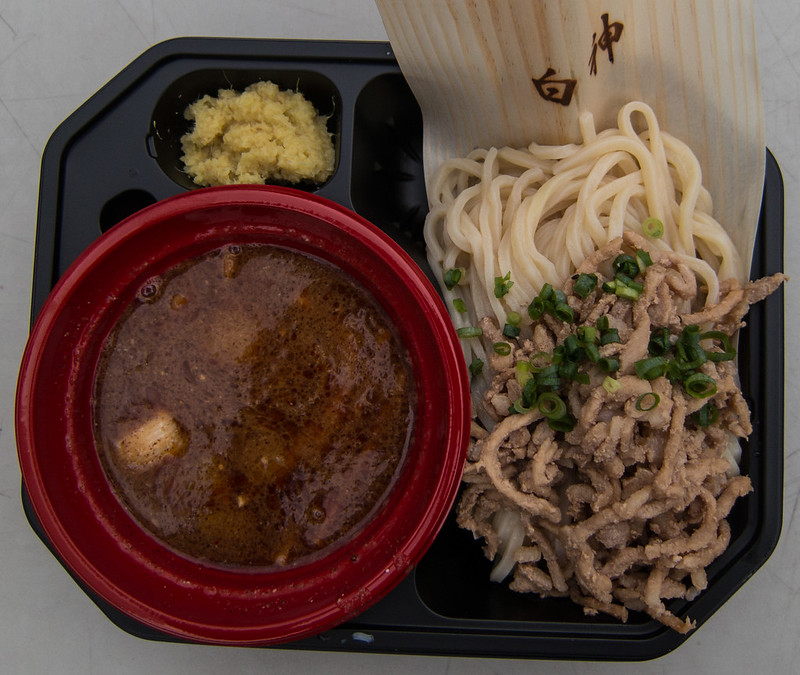 麺屋 白神 – Hakushin was an unexpected surprise. The soup, a ginger and miso blend, when mixed with the fried ginger pork topping was a meal on its own. 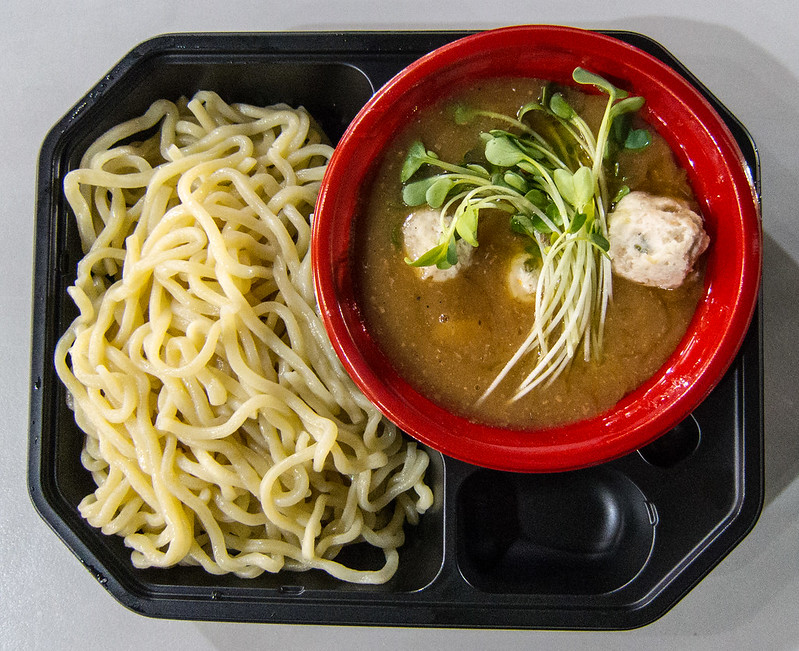 竹本商店☆つけ麺開拓舎 – Takemoto Shoten decided to take the best of the north and make a bowl of it. Hinai chicken is considered one of the top three chickens in Japan, and this soup is full of it. Add in Akita pork, and plenty of dried sardines and roasted shrimp heads. Intense, warming, and not too thick. 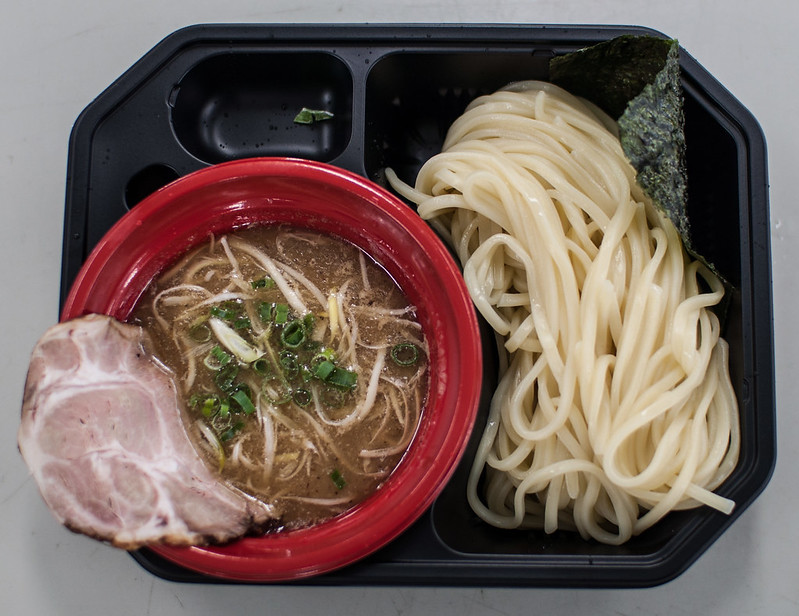 博多一幸舎 – Ikosha, hailing from Hakata in the southern island of Kyushu, decided not to go with the standard Kyushu tonkotsu. Instead, they made more of a Tokyo-style tsukemen. It was ok, but I forgot the taste after an hour. 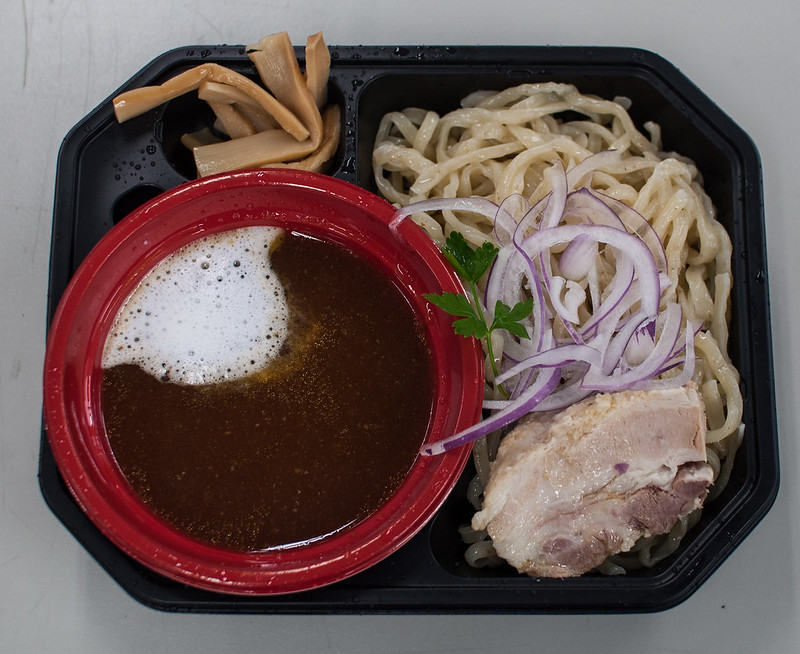 ラーメンJACKSON’S – I really wanted to love this one. Osaka is known for bucking the rules and making crazy decisions when it comes to food. This bowl was chock-full of blue crab and pork bones. But . . . in the middle of a cold autumn typhoon, the soup got cold too quickly and the taste plummeted. Good when piping hot, inedible when cold. 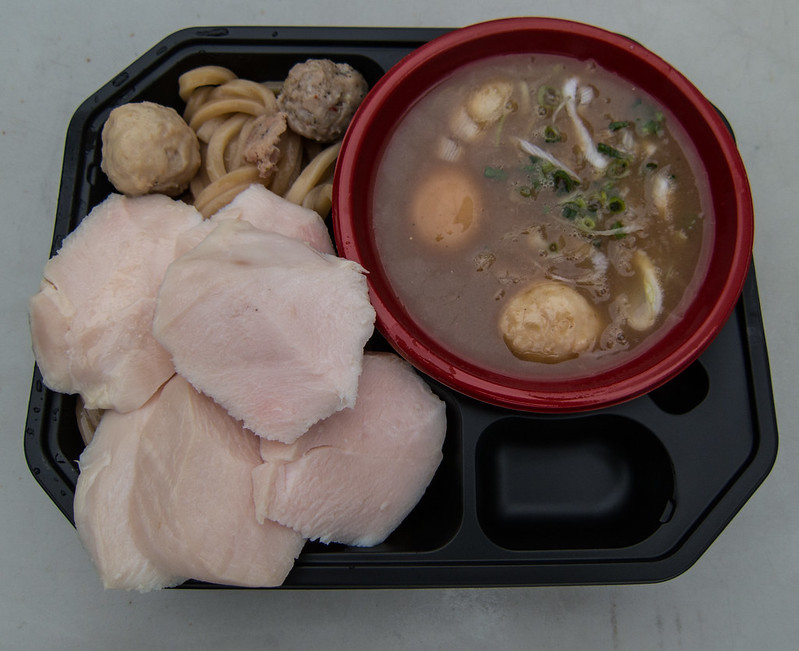 麺処蒼生 – If toppings were the only factor, Aoi would have been at the top! The slow business day meant that they were unloading extra free toppings on customers. Hence the six slices of slow cooked chicken, the two chicken meatballs, the two pork meatballs, and the egg hidden in the soup. Aoi is officially certified as a promoter of local Gunma products, so I feel a little bad putting them at the bottom of the list. Again, I had this on a cold, rainy day, and the taste reflected this. I’ll make it to the original shop someday soon and give a proper review!

Like Milli Vanilli said, “Blame it on the rain!”

Week 3 気むずかし家 - Kimuzukashiya really brought it with this surprise winner. Beautiful fried chicken, made from local birds from…