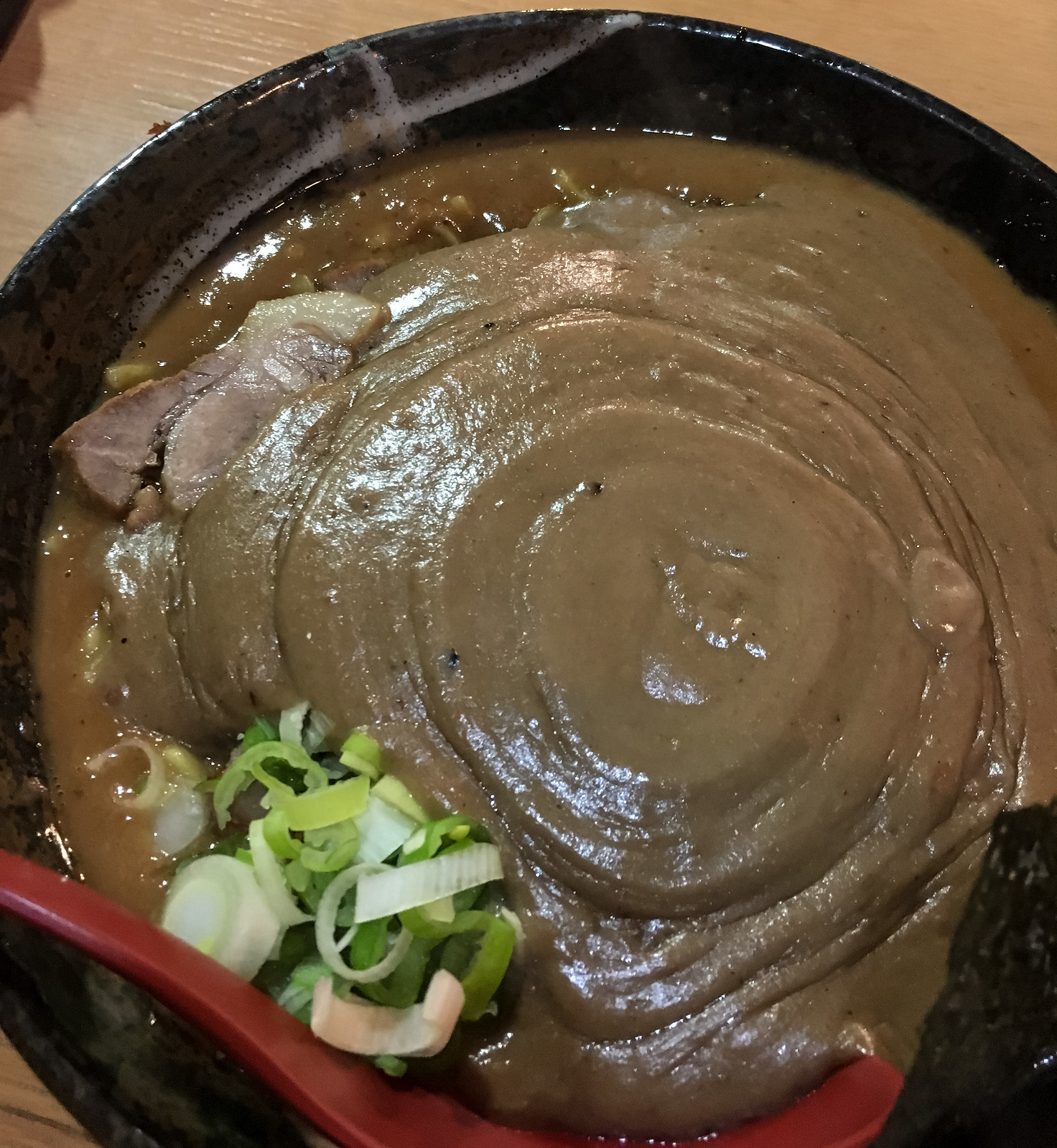 I know, I know, the above photo is positively disgusting. I believe I could have made it look appetizing if I had my Fuji XT-1 camera; this is the first post in ages that I used an iPhone for. But in my defense, I didn’t think I would be eating ramen this evening, in the middle of nowhere Nagoya.

But I have a star on my map, indicating a ramen shop that had somehow caught my eye, but was too far away for immediate action. 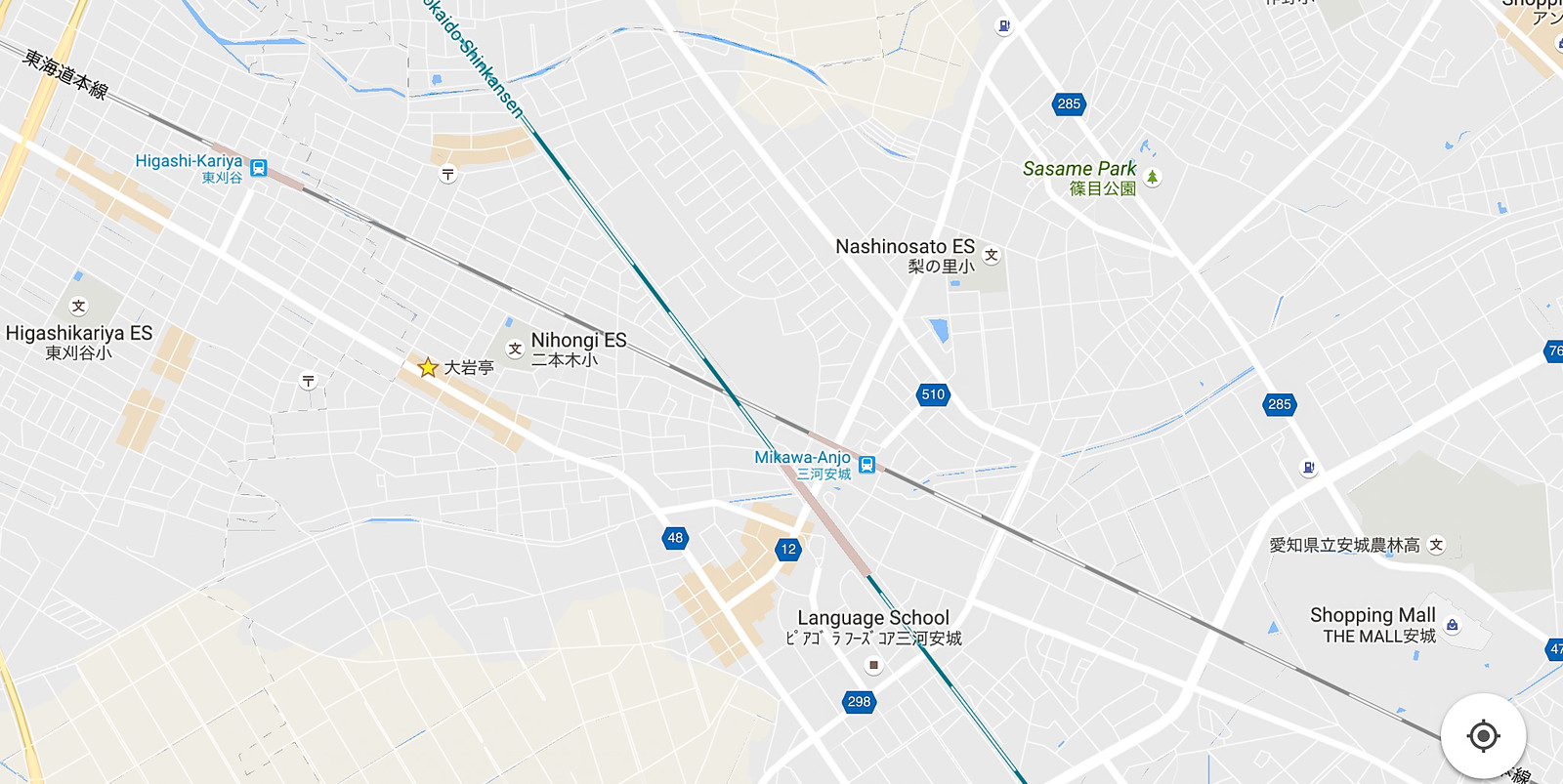 My hotel for the evening was at the intersection of the bullet train and local, near Mikawa-Anjo Station. 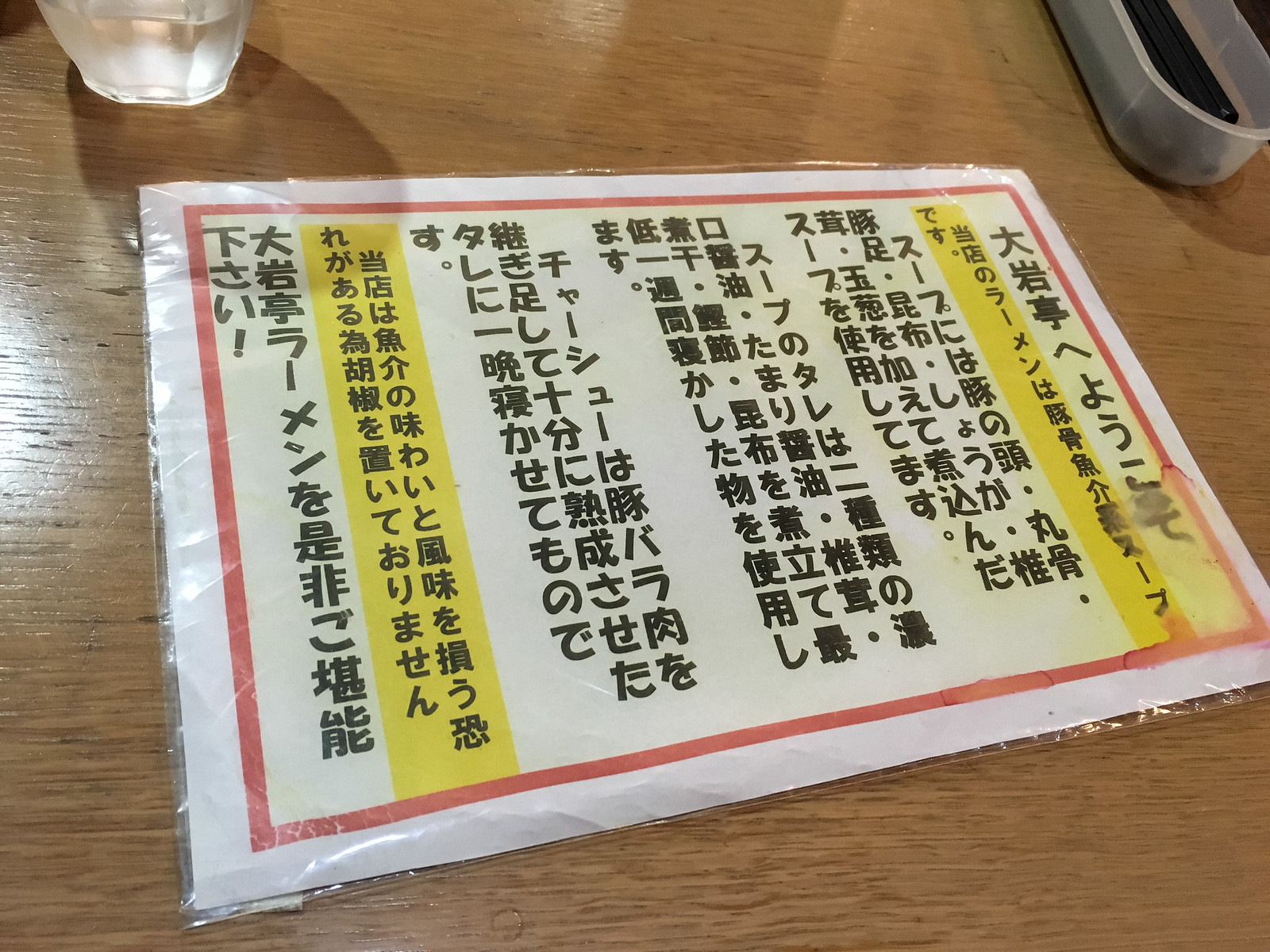 So that is how I ended up at Oiwatei. Why was this one on my ramen radar? What is so special? Thickest soup in Japan. Eccentric chef. 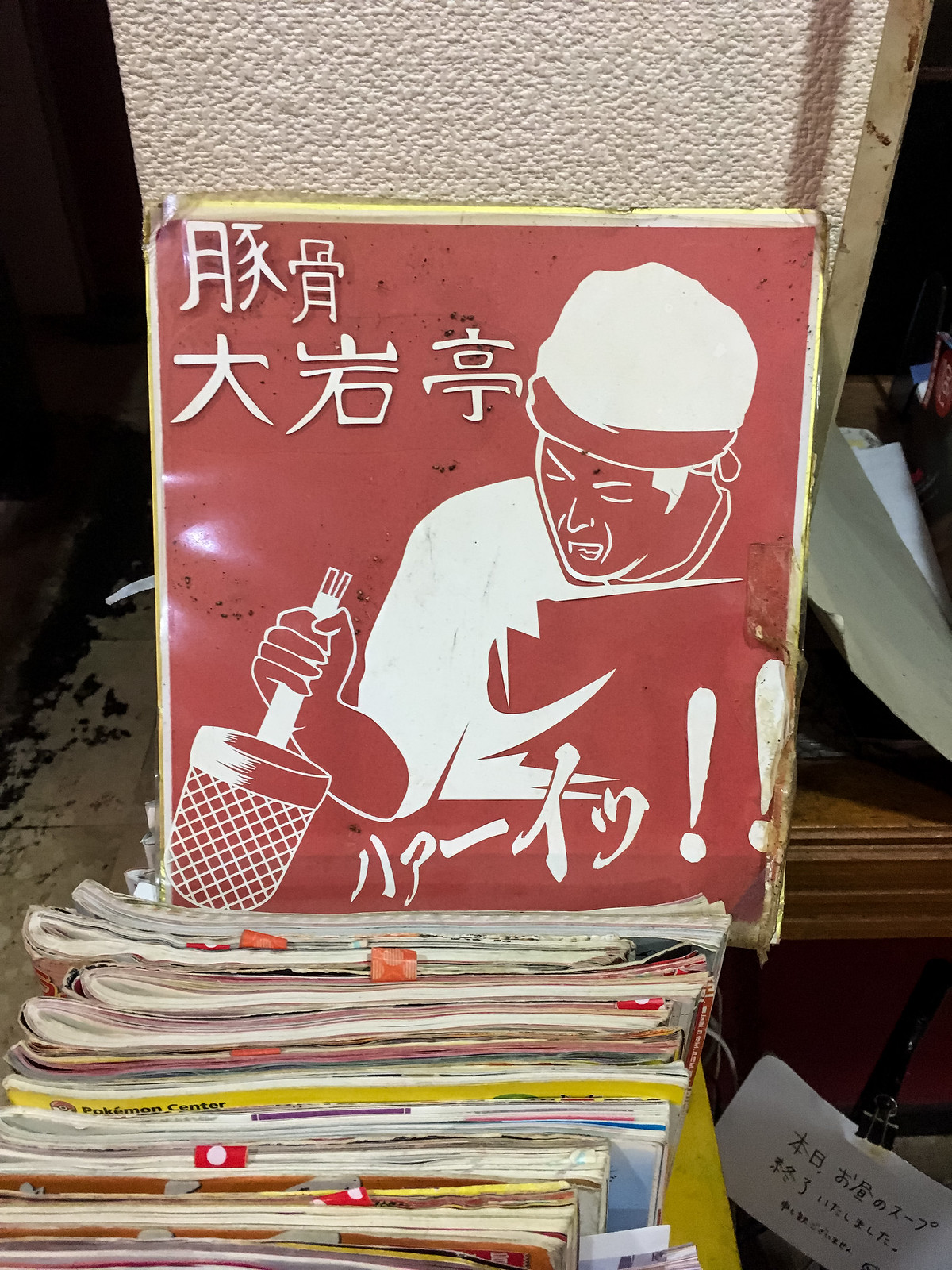 Yes on both accounts. The chef screams as he shakes the noodles from the boiling water. Haaaaaaa! Eeeeeeeee!

He also takes his sweet time. When I arrived, there were eight people ahead of me in line. Standard, and the usual formula is four minutes a person wait. But the master’s screams came infrequently. It took me almost two hours before I could sit, and another 30 minutes before I was presented my bowl. 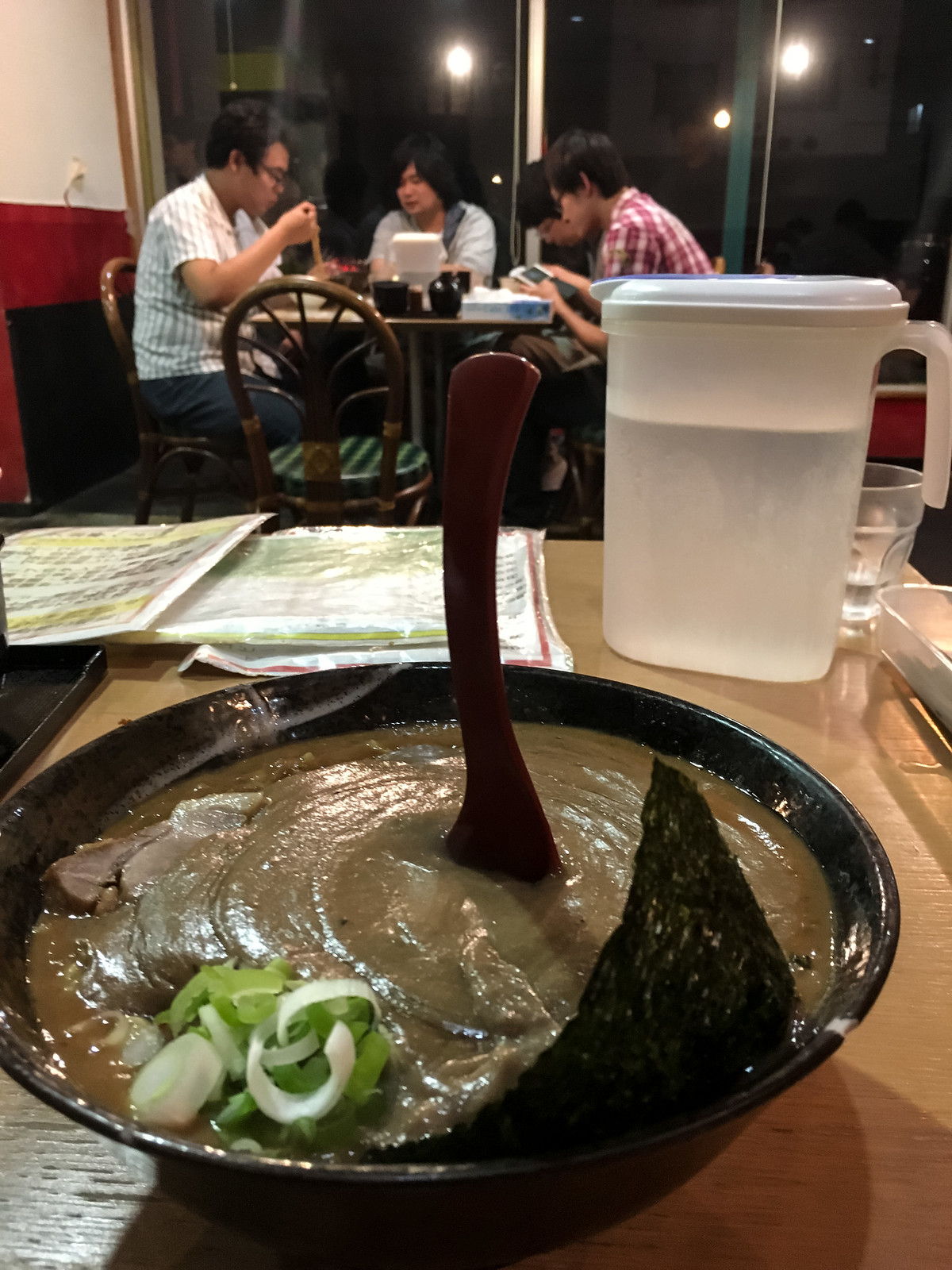 Yeah, that is my spoon standing up in the soup. I remember old Dennison’s chili commercials as a child boasting that you could stand a fork in the bowl. Well, this ain’t chili, this is soup. Ungodly thick soup.

*A quick cultural note: Never stand your chopsticks up in food in Japan, especially rice. This is done during a traditional funeral ceremony as an offering to the deceased. I asked a few people if a spoon was ok, and no one knew for sure. The general consensus is that it is fine. The above shot was taken by everyone who came here. 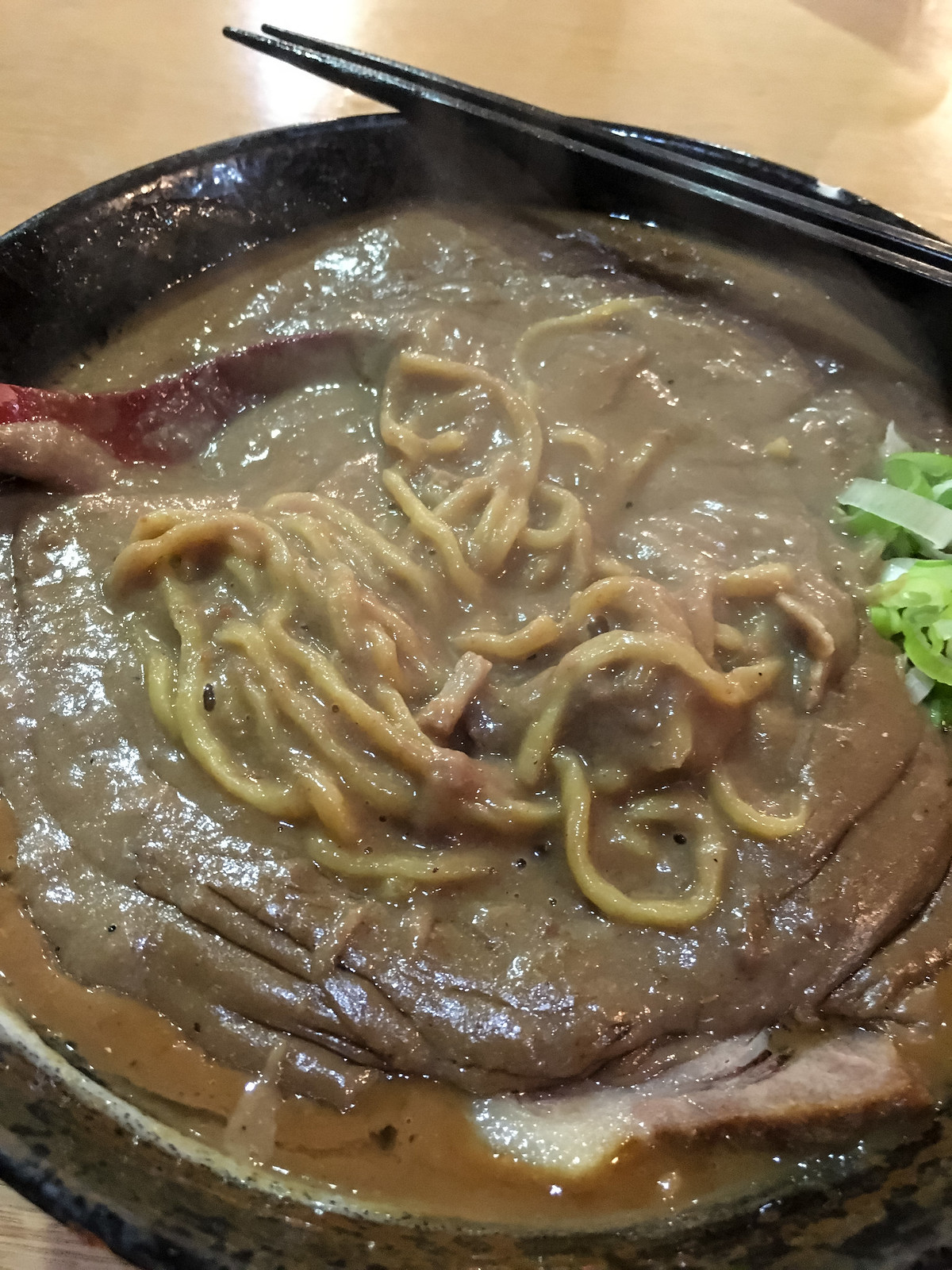 This bowl was horrible. If I were judging on taste alone, then it would be a different story. The soup was like drinking a pig, which isn’t necessarily a bad thing. Despite the wait, I’d say the novelty factor would put this one on a list of strange, yet interesting ramen in Japan. I might have actually come back.

No, the problem was a serious one. On my first slurp, something sharp hit my tongue. Spitting it into a napkin revealed its nature. A shard of pork bone. Then another, and another. Each slurp had to be done with care, followed by the oral removal of real shattered bone bits. I stopped after five or six miserable bites, paid, and left. 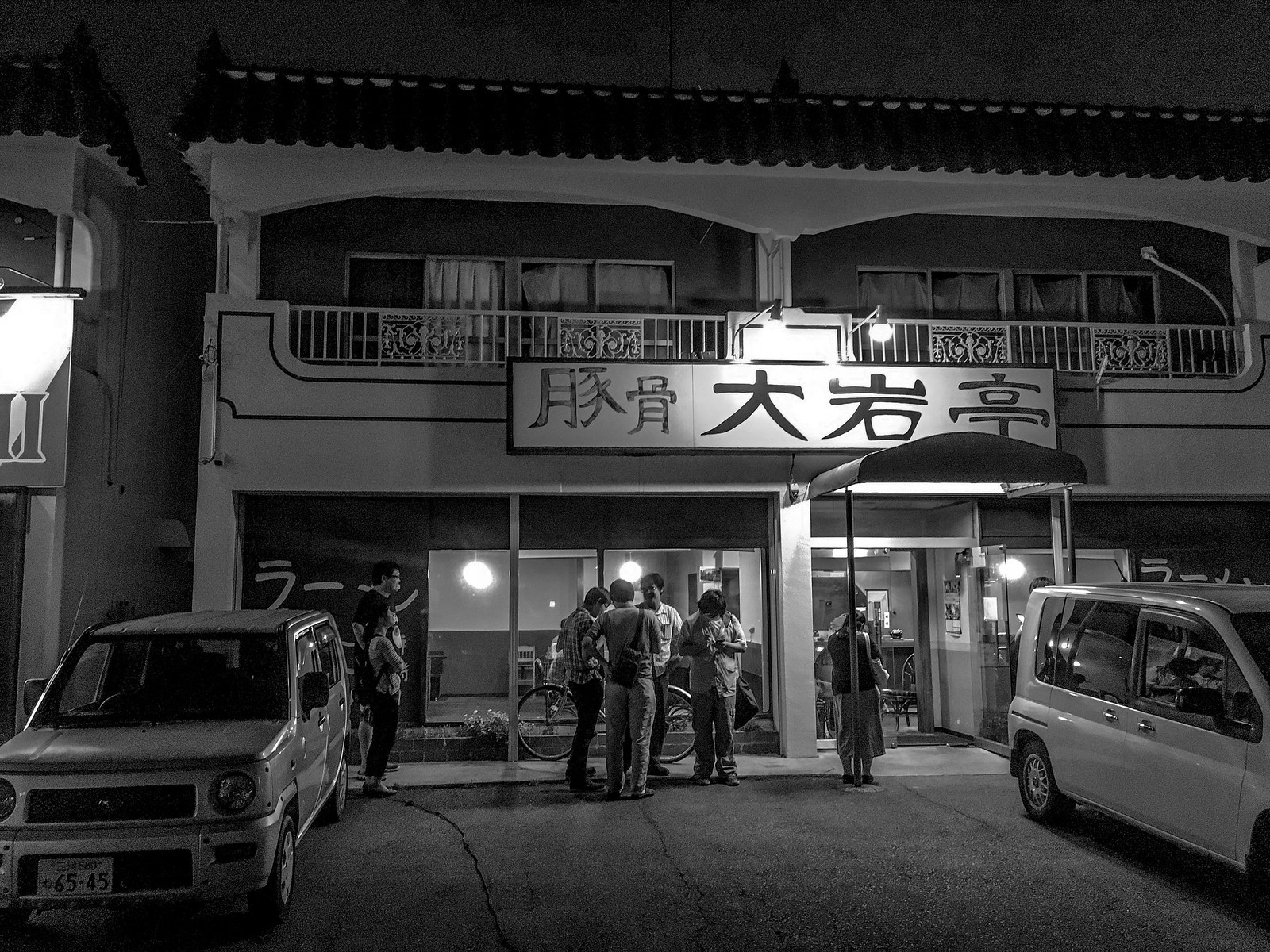 つけ麺 道 A few weeks ago, I made it to the wrong 道. A common name (michi means road or path),…

中華そば しば田 Shibata is one of those shops that you know about for years, but due to their slightly inconvenient…