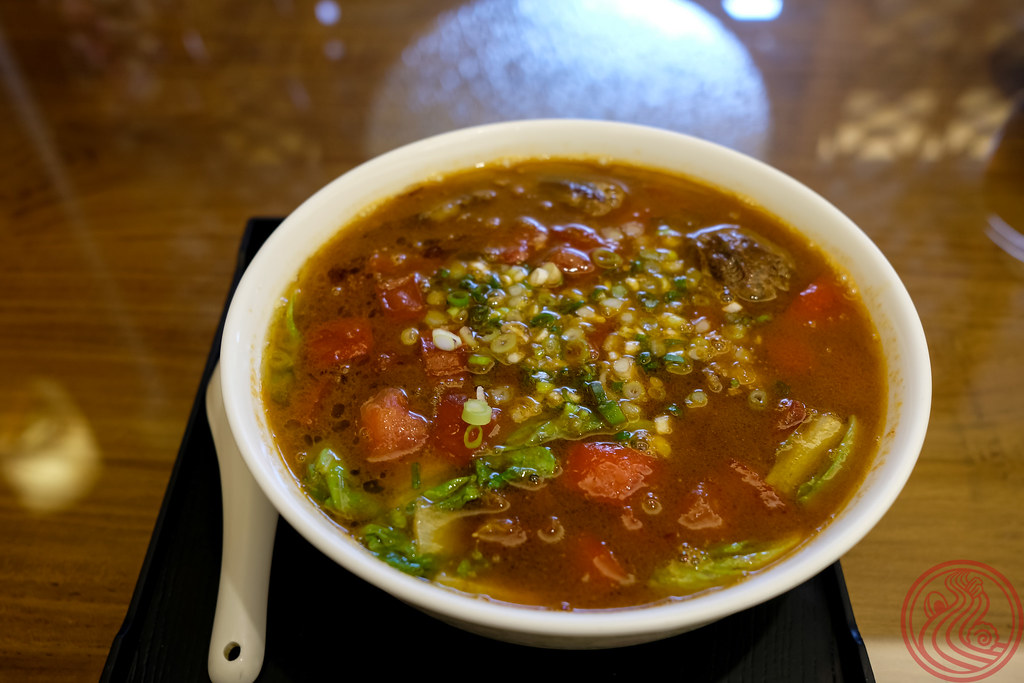 If you are a food nerd, you might have heard of this one. Niu Baba, or Beef Papa, has a record for the most expensive bowl of soup noodles in the world. 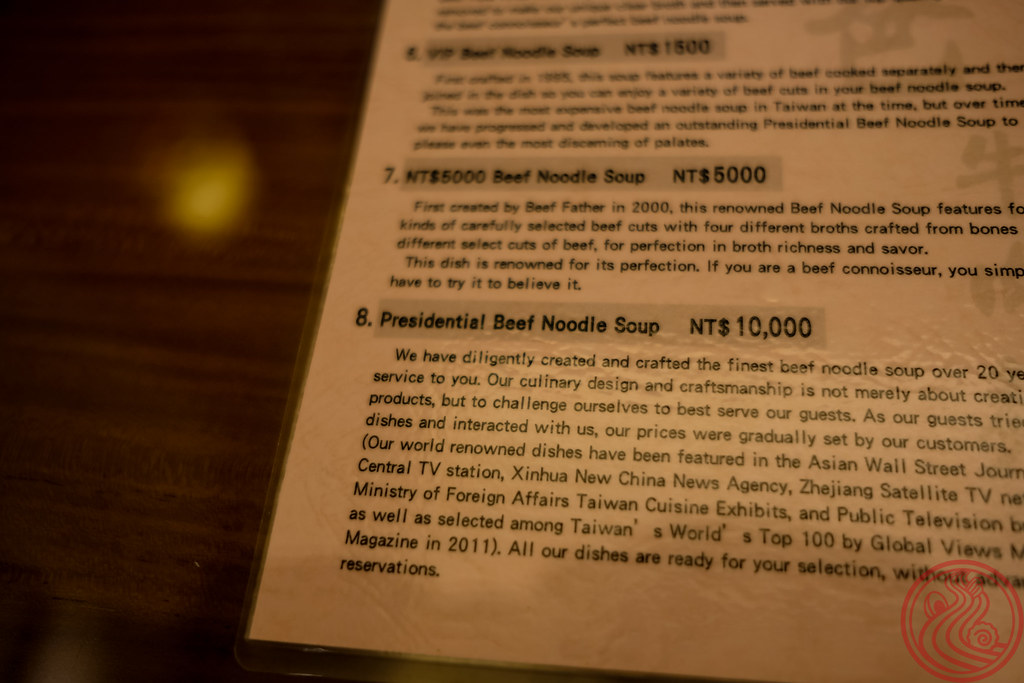 The Presidential bowl comes in at 10,000 Taiwanese dollars, roughly $330 US. For a bowl of soup. It is insane, but I was honestly intrigued. So much that I was completely on the fence about dropping the cash until the night before. The best beef from three different continents? I kind of want it.

As I sat sipping whiskey at one of Taipei’s hidden speakeasies, I was recognized by a Japanese guy sitting next to me. He was out here on business (he’s in the fashion world) and had recently had the bowl together with one of Japan’s most known street fashion designers. He put the nail in the coffin, saying it was a let down. 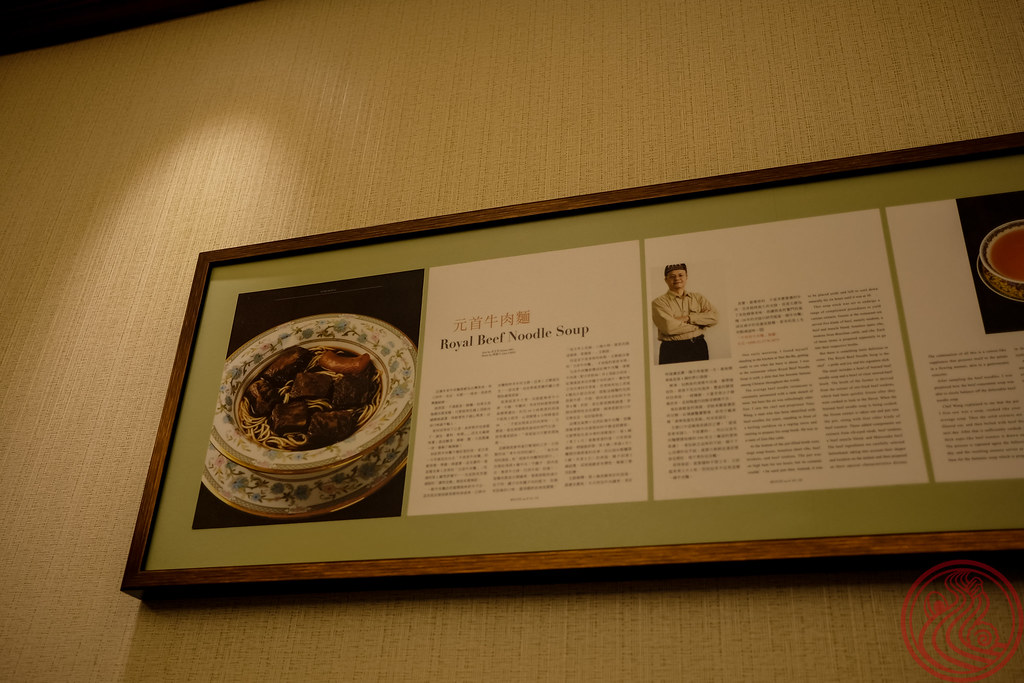 Funny thing about this shop, they also have NT$500 and NT$1500 bowls, so at least you can try a bowl and say you’ve been. 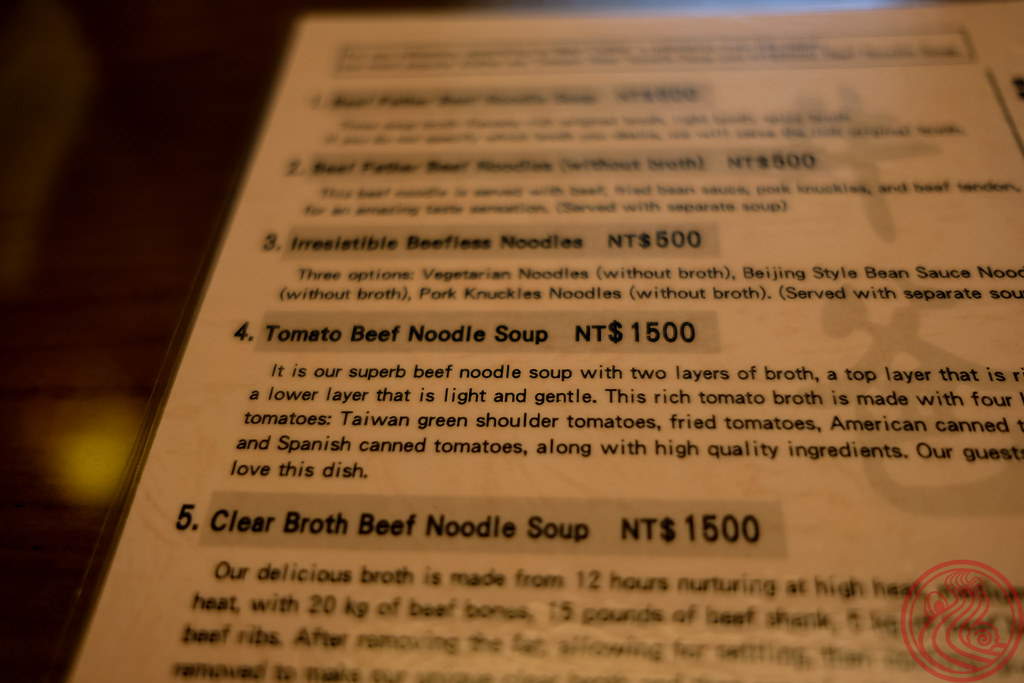 I went for the Tomato Beef Noodle at NT$1500. I made some arithmetic error, and thought this was less than $30, but it turned out to be more like $50 when my credit card bill came. So even though this isn’t the Presidential, it is still one of the most expensive bowls you can buy. 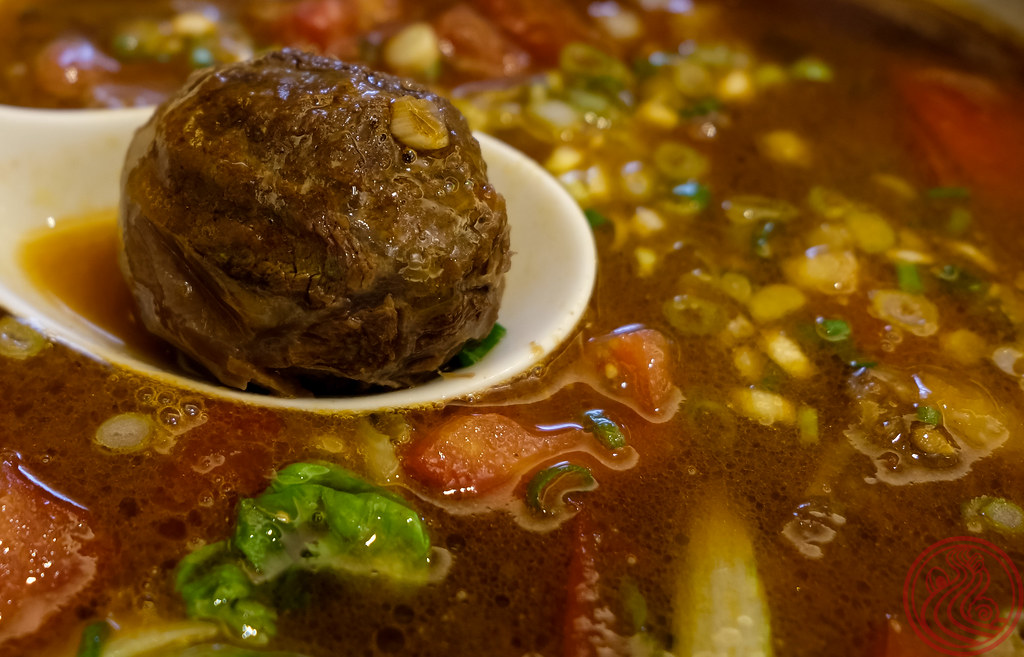 First the good. The three kinds of beef are phenomenal. Like, really tops. 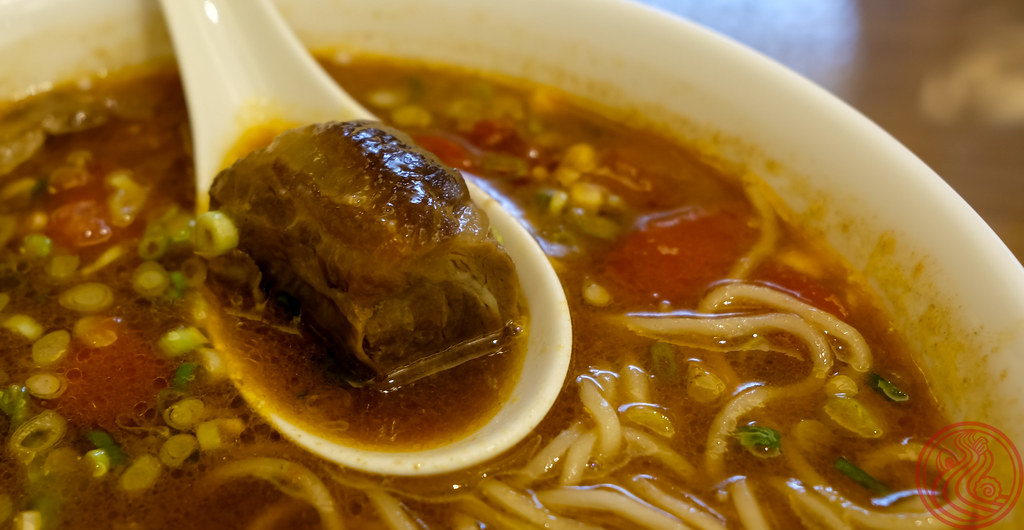 Each is prepared differently using secret techniques of boiling, freezing, and stewing.

No for the bad.

Everything else. The noodles were weak, but the soup was terrible. I blame the tomatoes. Looking back at the description, it has four different kinds of tomatoes, two of which come from cans. If you have ever eaten a low quality tomato out of a can (I mean, who hasn’t), then you know. It isn’t good eats. And an hour after eating, I had a metallic, preserved taste in my mouth. If you do go, get the normal bowl, and tag me on your Instagram post (@ramenadventures).

Beef was good though.

This was the last day of my trip, and the only day without torrential rains. Tip: avoid June. 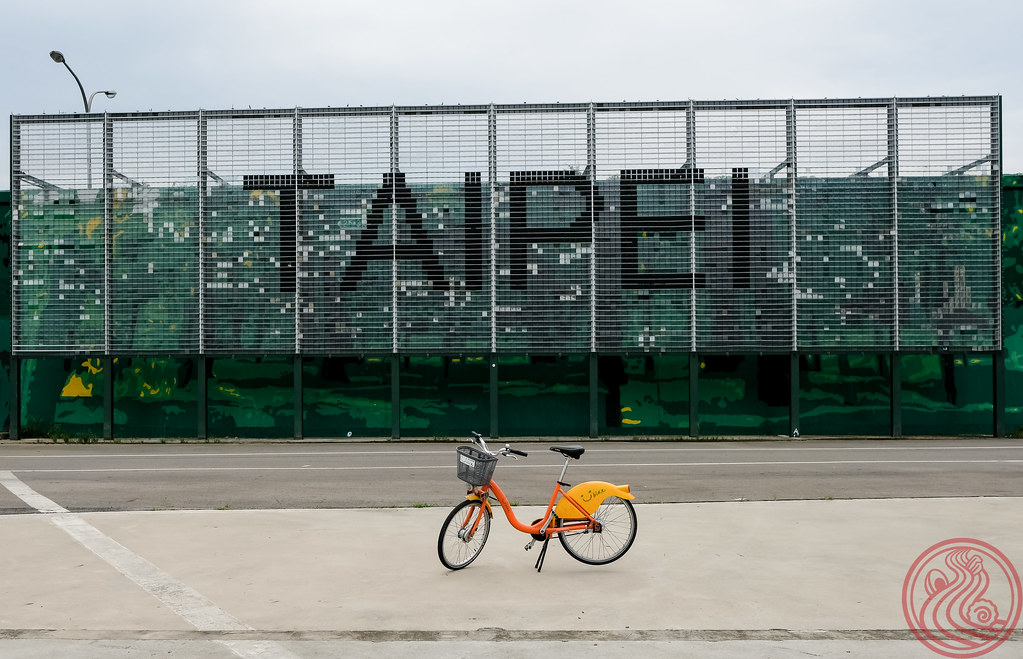 But, like I said before, there is so much amazing food that you quickly forget the mediocre ones. 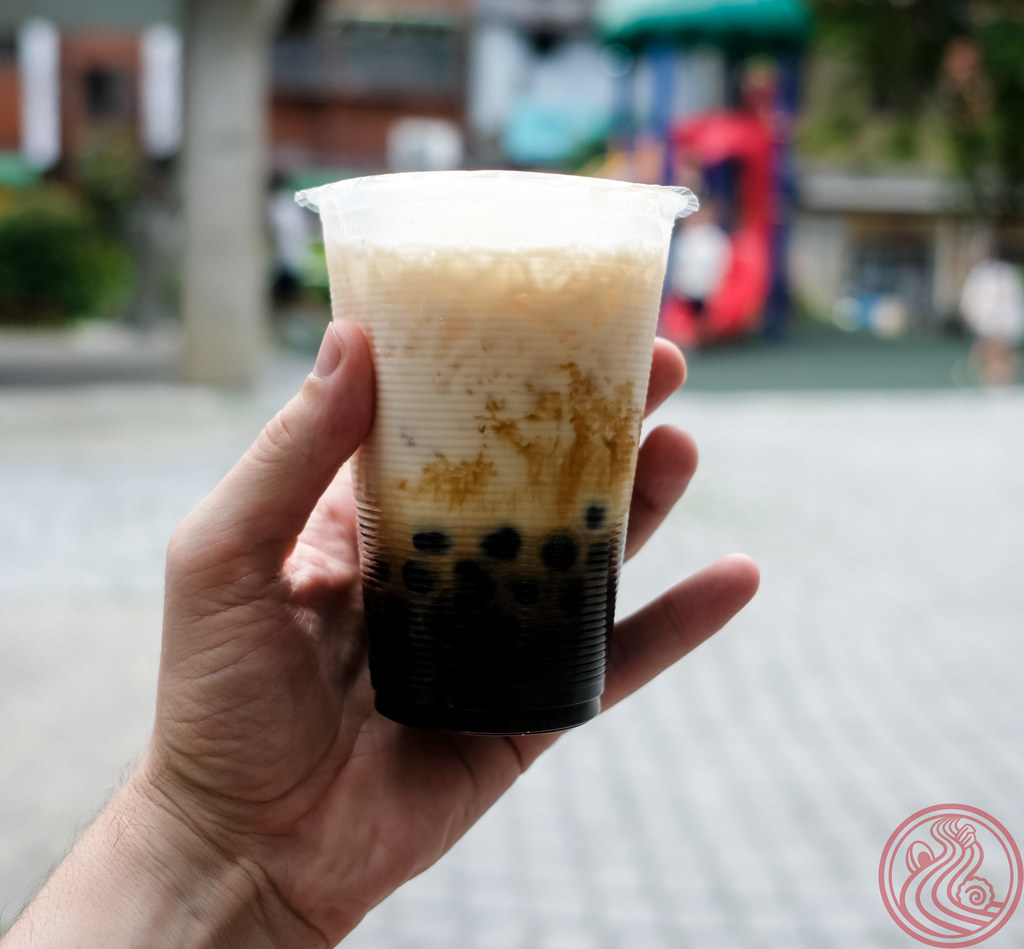 For those who value my opinion, here is my ranking of beef noodle shops I visited, with only the top three being ones I would actually recommend: 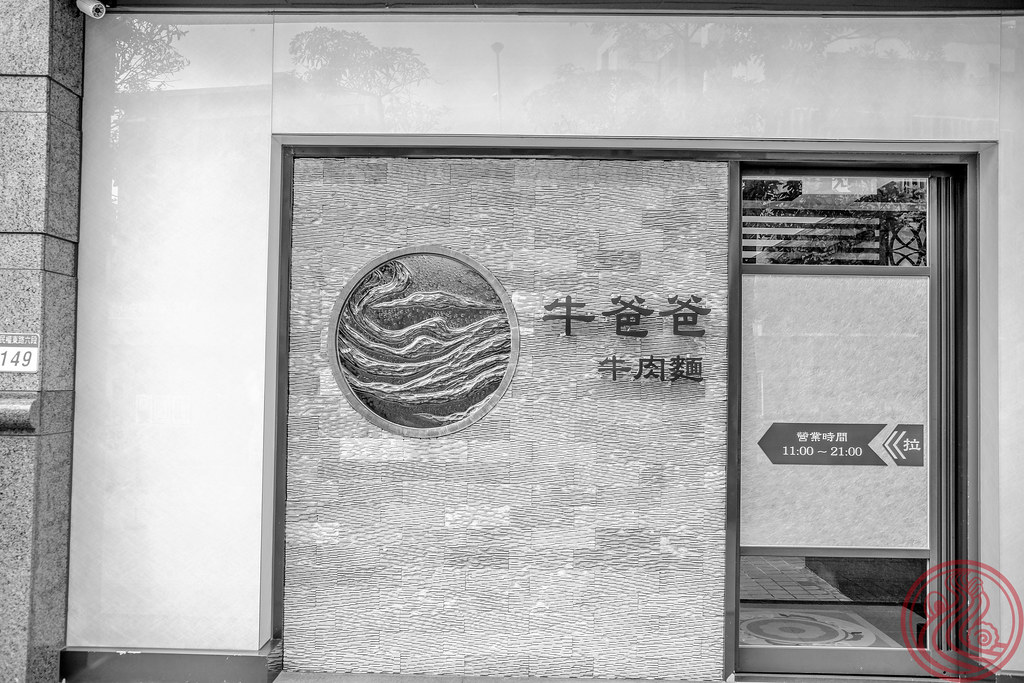 溫柔鄉 (The Tender Land in Taipei)

溫柔鄉 Yes, that is soupless tantanmen. But the story is so much more than that of just some good noodles.…

桃源街牛肉麵 Thank you to all of my followers on Instagram and Facebook. I put out a call for suggestions, and…